Over All Health and Prevention With Thermography

October is Breast Cancer Awareness month, and between the fundraisers and the awareness campaigns, women are faced with almost daily reminders of the disease. Yet they tend to feel they have little control over it beyond crossing their fingers and saying a little prayer. But June Drennon is hoping to shift women’s focus away from breast disease and toward proactive breast health. With good health habits, an understanding of risk factors and proper preventive screening, she says, there is plenty women can do to avoid that frightening diagnosis altogether. “There’s quite a bit of research supporting the theory that only 5 to 10 percent of cancers result from genetics,” Drennon says. “The World Health Organization says that 70 percent of cancers can be avoided, and many scientists believe that it is more like 90 percent.”

Just as we all have bacteria and viruses in our bodies, she says, we all have cancer cells too. So why do they grow and develop in some people and not in others? “There is almost never just one cause, but an accumulation of factors,” she says. “One important factor is the terrain of the body. All disease grows in an acidic, congested environment.”

The perfect breeding ground for disease is a body that is under constant emotional stress, sleep-deprived, and fed a steady diet of junk food, which is full of pesticides, hormones, antibiotics and sugar, Drennon says. Add foods that have been genetically modified (GMOs) and radiated until there is no nutritional value, and you contribute to an already unhealthy situation.

When we eat acidic foods, our pH gets out of balance, she says, and stress further acidifies the body and can contribute to shallow breathing and low oxygenation. And then there are the EMFs and environmental toxins to which we are exposed, to mention just a few other harmful variables.

“I know—it sounds like we don’t have a chance,” she says. “But once again, it’s the accumulation of factors, not any single one, that adds up to trouble. So it makes equal sense that if we make small changes every day, those can add up, too.” Among the changes she recommends: eating organic, avoiding GMOs, getting a good night’s sleep and detoxifying regularly. She also strongly advises knowing your risk factors for breast disease, which is a way to head off problems before they start.

“If your body was moving in the direction of developing breast cancer, wouldn’t you want to know that before the tumor formed, or would you rather find out after the fact?” she asks. “While conventional medical protocol is to get regular mammograms to find breast cancer as early as possible, a better option is not getting cancer in the first place. Thermography is a screening tool that can detect risk factors so plans can be put into action to improve the health of the breast and reverse developing pathology. This is prevention, not just early detection.” 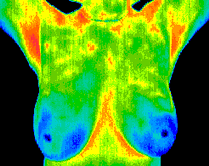 Thermography can reveal how healthy the breasts are instead of just screening for breast cancer, she says. It also has the potential to detect breast cell anomalies long before mammography can detect cancer, allowing a woman to implement lifestyle changes that can improve the health of the breasts proactively instead of just waiting for a cancer diagnosis later.

There are many things that we can do to avoid breast cancer, but knowing your risk factors should be at the top of every woman’s list, Drennon says. With proper risk assessment a woman can determine her risk factors and develop an action plan for improving her breast tissue or even reversing the existing developments. “Of course, the best outcome is to learn that you have a low risk for breast cancer, so you have one less thing to worry about,” she says. “Knowledge is power!”