The Appreciation of Flow

Alignment and Appreciation From Being You 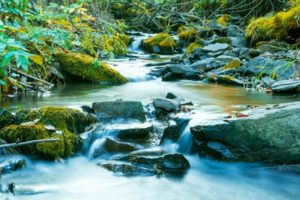 In spiritual circles people talk a lot about Flow.  It’s something like effortless effort with the Divine as your doorman.  It’s a great concept but it’s even better when you get to live it.

About a year ago, I was paddling down a familiar stretch of whitewater when I found a tangled up crawdad in a fishing line.  After about five minutes of meticulous unwinding, I launched the little fellow back into the wild.

My wife Tamara and my paddling buddy Tom, both thought that would make a great children’s story.  The next morning, I wrote my first children’s book, Jason and the Crawdad King, on the back of a few napkins while sipping tea in a coffee shop.

It was the first time in my life it felt like all the pieces were falling into place.  The premise of the story came out of doing something I love.  The suggestion for the story came from people I love.  Plus, the story imbues a sense of wisdom from my personal experience and philosophy˗˗something else I love.  And the whole package is directed toward the people that everyone loves—their children.  From the time I found the helpless little crawdad, to the moment I’m typing this out on my laptop, it’s been one endless magic carpet ride.  I think in spiritual circles they call it Divine Flow.

The day I finished writing the story, Tamara’s daughter Chantelle came to visit.  It was the first time I met her.  It just so happens, besides being a professional ballerina in San Francisco, she’s also a brain child from Columbia University.  In the two days she visited, she edited my book.  Flow on, man.

Next I met my illustrator, Lili Avakem.  Major Flow there. Lili and I met via the modus operandi of the 21st century…the Internet.  I was hoping to find an illustrator who was exceptionally talented, in love with illustrating, relatively unknown (like me), and hadn’t reached their full potential yet (hopefully like me too!).  In short, I was hoping for an enormous stroke of good luck.

I held a contest on Freelancer.com, searching for samples from illustrators.  Lili beat out 25 other entries. However, to win the contract to illustrate the entire book, I asked Lili and another artist from Thailand to submit one more illustration.  I took one glance at Lili’s second submission and my jaw dropped to the floor in utter disbelief.  I realized the enormous stroke of good luck I was hoping for had actually arrived. As I sit and write this, I still haven’t met Lili face-to-face.  It’s like she’s some angelic creator of magic, hanging out in cyber space.

Shall we Flow a little further?  After Lili and I finished the manuscript, I sent out queries to about 120 literary agents and publishers.  After about a month, as rejection notices started to pile up, I was contacted out of the blue by Golden Bell Entertainment in New York.  I never submitted anything to them.  They contacted me based on an illustration of Lili’s I posted on Facebook.  Go figure!

Golden Bell Entertainment offered me a contract for not one, but nine children’s picture books.  “Wow!”  You might be thinking.  “How did you pull that off?”

I’ll lay it to you straight.  Quite honestly, it happened by accident.  I couldn’t have done any of it on my own.  There have been so many separated events that have occurred in succession, that it’s impossible not to see the miraculousness in it.

And how did that all come about?  By being myself and doing what I love, with people I love, to the core of my being.

So if you’re looking for success in any creative endeavor, be it writing a book, opening a business, or starting a family, I’d suggest you start there.  The rest will take care of itself.  Your only job is to enjoy the journey.