A Different Take On Thanksgiving

A NATIVE AMERICAN PERSPECTIVE ON THANKSGIVING 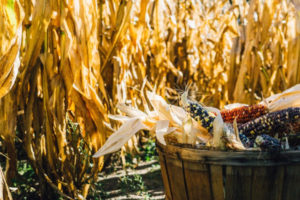 Photo by Aaron Burden on Unsplash

The traditional Thanksgiving holiday evokes images of family gatherings, turkey, pumpkin pie, and football.  History teaches us that when the Pilgrims came to Plymouth Rock in 1620, they were poor and hungry, with half of them dying within the first year.  The Wampanoags gave them food, taught them farming techniques, and even fed them through the winter.  In 1621, the Pilgrims and natives celebrated the first harvest with a bountiful feast which later became known as Thanksgiving.

This is where the textbook story ends.  By digging deeper into the history of this holiday, we discover a more sinister tale of broken treaties, racial extermination, and religious fanaticism. Early English explorers brought with them smallpox which decimated much of the native population.  Some estimated that diseases accounted for a death toll reaching 90% in some of their communities.

By 1623, Mather the Elder, a Pilgrim leader, was giving thanks to his God for destroying the heathen savages to make way “for better growth” meaning his own people. More and more boatloads of “entitled” English settlers began arriving in New England.  They raided village after village, slaughtering men, women, and children.  In many cases women and children over the age of 14 were sold into slavery.  Boats loaded with as many as 500 slaves regularly left the ports of New England.  Even the friendly Wampanoags did not escape the madness.  In light of these facts, one might ask, should Thanksgiving be celebrated?

Native Americans are even divided over this issue. Many celebrate the holiday by reinterpreting the event.

Jacqueline Keeler, writer and member of the Dineh and Yankton Dakota Sioux, celebrates the holiday by honoring the compassion and contributions that the Wampanoags made to the Pilgrims. She said, “They were not merely friendly Indians. They had already experienced European slave traders raiding their villages for a hundred years or so, and they were wary—but it was their way of giving freely to those who had nothing.”  They believed that by giving there would be enough for all.

The fact that her ancestors survived the many betrayals and atrocities gives Keeler hope that there can be healing.  “Because if we can survive, with our ability to give and share intact, than the evil and good that met that Thanksgiving day in the land of the Wampanoag will have come full circle.”

For many in the native community, Thanksgiving is a grim reminder of the genocide of their people. On that day, they gather at the top of Cole’s Hill overlooking Plymouth Rock and observe a “National Day of Mourning.”  It is an annual protest  organized in 1970, by the Native Americans of New England, to educate people about what really happened when the Pilgrims came to New England.

Dennis Zotigh, a cultural specialist at the National Museum of the American Indian, wrote on the Smithsonian Museum’s blog, “The Thanksgiving myth has done so much damage and harm to the cultural self-esteem of generations of Indian people, including myself, by perpetuating negative and harmful images to both young Indian and non-Indian minds.”

He remembers being asked to bring a brown paper sack to school so it could be decorated and worn as part of the Indian costume.  He believes this trivializes and degrades the proud Wampanoags.  “There are so many things wrong with the happy celebration that takes place in elementary schools and its association to American Indian culture; compromised integrity, stereotyping, and cultural misappropriation are three examples.”  While Zotigh agrees that elementary-school children are too young to hear the truth, he feels that educators need to share Thanksgiving facts in all American schools sometime before high school graduation.

The denial of the Native American plight is buried deep within the American psyche.  And like a psychic wound, it festers until it is exposed and brought into the light of consciousness.  This is not about carrying the guilt of the crimes our ancestors committed so long ago. It is about bridging the gap.

Truth is the healing balm that opens the door to understanding, compassion, and honest communication.

There is much positivity about Thanksgiving—relaxing and feasting with friends and family, thanking the Creator for our blessings, and sharing our bounty with the underprivileged.  A reconciliation with the Native Americans about the reality of our history would restore harmony and bring honor and integrity to this day of thanks.

About the Author: Nancy Hufnagel writes articles and sell advertising for a Montana magazine, Natural Life News and Directory.