Creating a World of Love 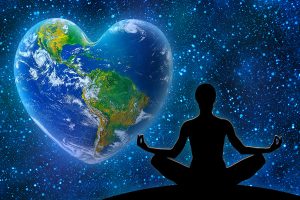 Years ago, shortly after the 9/11 attacks, I was taking a shower when suddenly I heard a man’s voice say loudly, “Do guided meditations for world peace on PTTV.” I spun around, expecting to see an intruder in the bathroom, but there was no one. I shook my head in amazement at this strange occurrence, and continued my shower.

After a few moments of quiet, once again the voice said, “Do guided meditations for world peace on PTTV.” This time the voice was louder and more determined. “I don’t do meditations, guided or otherwise, and I don’t have a clue as to what or where PTTV is. So go find the right person because it isn’t me,” I said louder and stronger this time. Silence.

“Well. That’s the end of that nonsense,” I thought to myself.

Little did I know how wrong I was. The next day I had an appointment with a new coaching client at my home office. During the get-to-know-you part of the session she told me that she lived in a very remote area. “What do you do for work all the way out there?” I asked her. “Oh, a little of this and a little of that. In fact, right after our session I’ll be going into Port Townsend where I work at PTTV… you know, the local TV station… running one of the cameras.”

As soon as I could pick my face up off the floor, I told her about the message I’d received the day before regarding meditations for world peace. “Great!” she responded. “I’ll talk to the station manager when I get there and tell him about it. I think he’ll want to do it.”

Shortly after she left my house, she called to tell me that the station manager was really excited about the meditation idea and he wanted to meet with me right away to discuss the details.

The next day I drove into Port Townsend and met with him. We discussed what I needed to do and by when. My biggest challenge was going to be finding people to do the meditations. As it turned out, some of the local metaphysical people I knew were all too happy to share their guided meditations. The first person I called was a woman who holds weekly meditations at her home. She was hesitant, but the idea of helping to promote world peace finally won her over.

At the appointed time we all arrived at the studio for the first Guided Meditation for World Peace on PTTV. After the equipment was all adjusted she began. The manager had called me into the control room so I could view the show without disturbing my friend as she gave the meditation instructions.

We are currently in a similar situation of our country being attacked, causing people to be consumed with fear. The difference is that this time the enemy is much scarier because it’s a virus which is invisible. And it’s not just our country that’s being affected… it’s involving the entire planet.

Guided Visualization for a World of Love

There are three ways you can help to create a world of love. One method is to use this visualization often, for yourself and others. The other method is to share the visualization instructions with your friends and loved ones. The best way is to utilize both methods.

Use this Energy of Love visualization/meditation at least once every day… and remember to share it with others.

Author: Kathy Wilson is a noted spiritual teacher and mentor, Certified Life Coach, Reiki Master, Psych-K Practitioner, and author. To learn more about Kathy, her products and services, and to sign up for her newsletter, visit her website: Warrior-Priestess.com