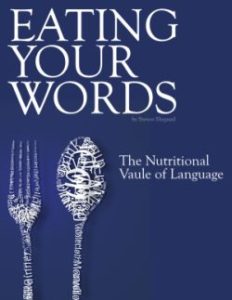 The power of conscious language

“There is a saying……”Man does not live by words alone.”  Since I have gotten to eat most of mine, I agree! Most of my words from the past tasted pretty rotten, and lacked nutritional value. I had run-on sentences, operating from run-on belief systems that kept me constantly running at the mouth. With my mouth open all the time, it was really easy to get my foot stuck in it! Between the rotten words, and my foot I realized it was time to change my diet.

Turns out, language is encoded into our genetic makeup, influencing our thoughts, feelings, actions and our future. Unfortunately, it seems the vast majority of us are raised into a world where confusion, babble, vagueness and negation are deeply rooted into our language system. And, for the most part we are oblivious to the ways in which they impact us.
Think for a moment… how often have you found yourself digesting the following phrases?
I don’t know
I need
I can’t
I wish I could
I hope someday
I’ll try to
I’m not
they won’t
I never
my problem is
If I can
I should
they shouldn’t
they always
It won’t help
I have to

I never get to
I give up

Sound familiar? How often do you hear yourself say one or more of these daily? Hourly? Or, even minute to minute?
How often are these words and phrases incorporated into your world regularly? They seem on the surface to be harmless, but to the contrary they are extremely corrosive and highly combustible fuels!

Unconscious language patterns such as the list above infect our ability to focus our dreams, create specific outcomes, establish lasting relationships and communicate our true feelings. They can create pain, separation, lack and frustration. Think of them akin to malicious viruses in a computer operating system.  Like a virus they destroy the source code and impede the flow and function of the system.  Operating on an unconscious level, these viruses in our language often fall outside our awareness. Because they are used so frequently they are hidden. Because they are hidden to us, we become unconscious victims. These perceptions they create deeply influence us and affect us on a genetic level. Even our health is affected by our language.

Consider this, in a recent study of by linguist Grazyna Fosar and Franz Bludorf, our DNA is not only responsible for the construction of our body but also plays a role in data storage and communication.  The Russian linguists found that genetic coding follows the same rules as human languages.   Alkalines of our DNA follow a regular grammar and have set rules just like our languages.  Could it be human languages and language patterns did not appear coincidentally but are a reflection of our inherent DNA?

Further studies by biophysicist and molecular biologist Pjotr Garjajev and his colleagues explored the vibrational behavior of the DNA. They reported that modulating certain language frequency influenced the DNA frequency and thus the genetic information itself.  It appeared one could simply use words and sentences from the human language to affect biology.

Since our thoughts, our voice and our feelings are measurable waves, science now has some evidence as to how influential language is to our genetic structure.  It is reasonable to say, if we change our language we can change the very nature of our being.

Knowing this, let’s look back at our diet of words and phrases and see how they feed into our biology.  We have become so accustomed to our word patterns such as “I WANT” and “I NEED” as normal that we have become blind to their detrimental effects on every aspect of our lives. Think of the phrase “I want”.  Imagine a mime on a stage, acting out what “wanting” looks like. Look at his face. What are his gestures saying? You get the picture now right? It’s pathetic and desperate looking. Yet we say it every day.  Now, let’s consider a little further; what do we all think “I want” means? “I am going to get” ?  Not usually. To our subconscious it literally means “I lack having”.  It’s an energy of lack and not having being programmed inwardly as a true belief statement.  Wanting isn’t necessarily good, bad, right or wrong, it just lacks power and potential to really achieve.  But, you say, our words and our wanting have gotten us pretty far along and we as a species have created marvelous things. Agreed! But, think about upgrading “I want” into  – “I choose” or “I create”.  Replay our mime acting out these replacement statements and compare what you saw. Here we can easily see the mime in a state of power and ownership with conscious words vs. wanting words. Say them out loud to yourself and feel the difference from saying “I want” and “I choose”.  It is a powerful lesson in conscious languaging and something you can do right now to test it.

Upgrading our words alone can have a profound effect on every aspect of our lives. With words, a persons  thoughts can be formulated, with thoughts feelings are assembled. Feelings feed actions, actions define character, character shapes our destiny, and destiny mirrors our current reality.  In short form the equation simply stated is; WORDS = DESTINY/REALITY.

What I discovered for myself was every word I spoke and every thought pattern derived from my words was acting in my life the same way ingredients would in a recipe.  Instead of baking a delicious cake with my words I found that what I was really making were more like mud pies.
Consider this, whatever we say after the word “I” in reference to self becomes true to the subconscious mind. Our subconscious is 100% literal and does not know good, bad right or wrong, it simply listens to what is repeated and takes it on as its course and function to create.  Obviously in reading this we immediately can see the impact of negative statements or beliefs. What isn’t as easy to see is when we are actually doing it everyday when we interact with others. Over time these patterns imprint the subconscious mind, taking everything said as 100% literal and true for the self or the identity. Think of the unconscious as a magic genie that listens to everything we say, and responds with “As you wish!”

Here is a simple example we all can relate to, have you ever misplaced your keys?

When I say or think, I am late for work, my keys are lost, I’ll never find them on time. When I show up late, my boss is going to be angry with me. My subconscious Genie responds: As You Wish!  The result: My keys remain lost to me as I struggle to find them.  Where my attention goes, so goes my power. If I am, focused on what is wrong about myself, what I don’t like, what I am avoiding feeling, my energy amplifies the statements I am making to be true and I get more of the same. Plain and simple.

Using conscious language in the same example I can co-create with my subconscious mind and create a different outcome for myself.

Our opportunity in life is to recognize we have a choice in how we approach any given circumstance and which set of statements we choose to invest in.  Try it for yourself.  Here is a simple set of conscious language statements.  Make it your test to go a full 24 hours saying only these words after you say or think the personal word “I”.  See what kind of shifts happens.  Notice how often you may be saying “I should” and make a conscious effort to stop should-ing all over yourself and others. Speak from your own heart and your own experience for a full day, a full week, a full lifetime, and reap the rewards of a consciously fulfilling life.

You now have a rich, flavorful menu of nutritious choices.  Your communication and language is empowered consciously and simplified. Bring love, warmth and heartfelt joy into every word and deed. Speak less while saying more. You’ll find ife now is powerfully engaged by your words, thoughts and feelings… words that can empower your life while keeping your feet on the ground where they belong.