February 2020- The Universe is Talking 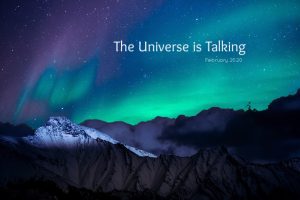 The Universe is Talking every day. All the time. In as many languages as there are forms of life in the infinite solar systems.

The Universe is Talking. Are you listening?

Don’t believe me? Think I’m crazy and just blowing more of my Pollyanna pie in the sky at you?  I can accept that. After all they don’t call me a five year old because I act or think like the average adult.  In fact, I’ve made it a point to view the world like a five year old.  It’s how I hear the universe talking.  And the older I get the more I realize it’s a gift because at a certain point in life we turn off our ability to hear and see all that the universe has to offer.  We purposefully forget there is more going on because forgetting makes it easier to function here.

For example, when we lose a loved one the pain can be too much for the mind and body to bear so, we shut off everything that we perceive will bring more of the same pain. We become closed to the everyday miracles that the universe is offering and only allow ourselves to experience what the mind deems painless.

Here is an example of what I am talking about.  My wife, whom I call Moonbeam has an amazing mother.  Evelyn who was affectionately known to her children as Mama Bear left this time space reality nine years ago.

My Moonbeam still aches today like it was last week.

Whenever we talk about Mama Bear, she tears up and at some point, says, “If I could just smell her smell, if I could just see proof that she is ok it would help”.

Because Moon Beam is a very “seeing is believing” type person Mama Bear has to show up exactly as Moon Beam is expecting her to.  This becomes a challenge because Mama Bear does not communicate the way she did when she was here on earth.  To make this work for Moon Beam we have to show her that The Universe is Talking, and second help her be open to a different form of communication.

After hearing Moon Beam talk about Mama Bear, a friend came up with a way for Moon Beam to “see” communication from both Mama Bear and the universe. The plan was to set a plain glass with a straw in it on our cupboard.  Nothing else.  Just a straw.  The idea here was that Mama Bear would move the straw whereby showing Moon Beam that she was here and is talking.

For the first few months not much happened.  Then I noticed something. The straw would move slightly.  Then one day I noticed it had danced around the glass. Long story short.  Moon Beam was listening.  She was seeing the straw move and she knew no one was moving it.  The only possibility was that Mama Bear was in the house. Mama Bear, just like the universe was talking. After this experiment I could see and feel a difference in my Moon Beam.  It felt like a small sign of belief was solidified by an act of seeing.

Don’t tell her that.  She surely doesn’t believe in my WuWu stuff.  Nor does she really believe that The Universe is Talking, well maybe she does but she would never admit that. At least not to me.

Welcome down the rabbit hole of The Universe is Talking. 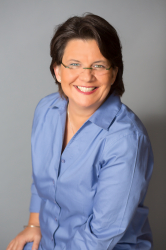 Since the creation of Conscious Shift Community it has expanded in the readership and services offered.  In the Conscious Community you will find books, book publishing services, coaching and divinely inspired jewelry called HeartWear.