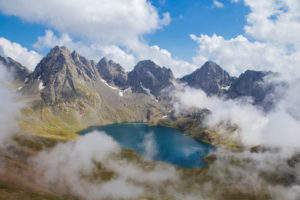 My trip this summer was to the country of Georgia. That is the country of Georgia and not the state in America. A small country about the size of Ohio, it’s tucked in a southern corner below Russia and right above and bordering on Iran. It is an ancient country noted for fierce warriors. Leo Tolstoy, the author of War and   wrote about fighting there as a young soldier. Some people might recognize it as the birthplace of Joseph Stalin. It also has super modern resorts on the Black Sea, the dramatic Caucasus Mountains, and fortified stone villages with some of the largest guard dogs that ever scared the living hell out of me.

A visit to Georgia starts in the capital of Tbilisi. One needs to fly from somewhere in Europe or a country like Turkey. I flew out of London on Georgian Airlines that flies twice weekly directly to Tbilisi. The flight from London took a little over five hours. I was met by the guide I had arranged through a company in England. Having researched Georgia, I realized it had little infrastructure for independent travel and I would have to go on a group tour or hire a driver and a guide. I chose the private guide. A young Georgian girl named Rudaya met me at the airport.

Driving into Tbilisi we first passed through suburbs of large, drab Communist-era buildings before reaching the picturesque center. Tbilisi straddles a tree-lined river with ancient churches and fortresses on the hills above. My hotel was a beautiful boutique on a narrow street in what is called the “Old Town.” On the same inclined street were both a Sunni mosque and the famous Oberliani bath. The hot, sulphur-watered baths of Tbilisi have been famous for centuries, providing cleansing for locals and a way for all-night revelers, such as the writer Pushkin, to ward off hangovers. At the Oberliani that evening I luxuriated in a private, blue tile pool of natural hot water. After soaking for a while an attendant came in and proceeded to scrub me down with a coarse hand sponge and then rinse me off. He did this several times until I returned to the pool for more relaxing.

The perfect antidote after a long flight.

After a day or so of taking in the sights of Tbilisi, we started a long day’s journey to the mountain town of Kazbegi. You get there by using the famous Russian Military Highway that takes you through some incredible mountain scenery and eventually to the Russian border. The highway was built out of no benevolence by the Russians, but as way of moving troops in to subdue the population when necessary. The relationship between Russia and Georgia is complicated with Georgia being an autonomous country wanting closer ties to western countries and NATO. Russia does everything to sabotage this and last invaded and occupied parts of Georgia in 2008. In spite of this, Kazbegi near the Russian border is making good use of its mountains and has developed a modern ski resort and hotels. I stayed at the best of these called the Rooms Hotel with lounges, sauna, a pool, and sumptuous buffet breakfasts.

The next day’s destination was the mountain town of Mestia, but before arriving we stopped in the town of Gori, which is the birthplace of Ioseb Besarionis dze Jughashvili, better known for the name he gave himself of “Stalin” which means “man of steel.” Joseph Stalin started out in the seminary studying to be a priest and writing poetry before he ended up as the terrifying dictator who killed maybe 20 million of his own people. The large museum was interesting with rooms of pictures and mementoes from his life. His private railroad car was outside, and visitors were welcome to pass through and view how the great dictator traveled.

My guide noted the number of Russian visitors in the busy museum. Many Russians still revere Stalin as the man who saved them from the Nazis. Russians tend to think we Americans take their part in WWII lightly. Since this is the 75th anniversary of D-Day it might be good to remember that two-thirds of the German army were fighting Russians on the eastern front on D-Day and that during the war, seven out of ten German soldiers were actually killed by Russian forces. The number of Russians killed in WWII was approximately 25 million. We can criticize Stalin for the despicable treatment of his own and other people, but Russians believe their significance in defeating Hitler’s Germany is little understood by Americans.

Mestia and its neighboring town of Ushguli may be the highlight of a trip to Georgia. At 2100 meters they are considered the highest inhabited towns of Europe and are surrounded by the stunning Caucasus Mountains. The dominant feature of these ancient stone villages are the tall towers built for defense against marauding neighbors. Mestia has reasonable accommodations and a great ethnological museum, but it is the trekking in the mountains and hillsides that will stay with you forever. My guide arranged for us to lunch most days in the homes of welcoming families.

Our final destination was the Black Sea Resort of Batumi. An all-day drive brought us from the highest mountains in Europe to this modern beach city on the Black Sea with its beautiful esplanade along the water that was not too dissimilar from Clearwater, Florida. For two nights I enjoyed a good hotel with rooftop dining and nightlife that included a modern casino.

Then it was back to Tbilisi and the journey back through London.

I have left out a great deal about this two-week journey including the ancient monasteries with priceless icons, attending Georgia’s magnificent Opera House, wonderful art museums, and a hospitable people. It is all there in a country with an ancient history and a difficult future. I wish them the best.

Larry Wilson was born in the small steel mill town of Alliance in north eastern Ohio. While working in the mills during the summer, he completed a Master’s Degree in Communications from Ohio University in Athens, Ohio. In Clearwater Florida, Larry was an investigator for the Pinellas County Department of Consumer Protection. He also produced their television show, Your Consumer Protection. He has traveled the world.

Latest posts by Larry (see all)

December 2020- A Conscious Review of the Year

A Conscious Year in Review   It has been an interesting year. We have experi ...

The Importance of Being Yourself

“Be yourself; everyone else is already taken.” Oscar Wilde As children we want to be like our p ...