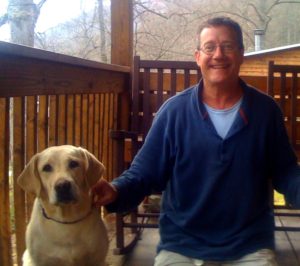 On April 4, 2008, I was involved in an accident in which a careless driver backed up 25 yards without looking, crushing my beloved Labrador retriever, Gracie, and I between the rear of our car and hers.  I did not feel the impact until Gracie was crushed to the width of my calf.  In an act of unselfish loyalty an in what I can only imagine was immense pain, she circled around and laid her head on my shoulder.  My leg was broken in 3 places and my knee torn ragged, but the pain was minimal compared to the emotional heartache I felt realizing that, though her loyalty had saved my life and most assuredly my legs, Gracie had died.

I had surgery, worked on crutches, and awaited my day in court, only to learn that contrary to the bond we have with our pets, they are classified as property in all 50 states. The parent of a pet killed though negligence or malice is entitled to replacement value.  Ninety percent of the pet owners consider their pets family, but the law sees them differently, as does the insurance industry.  We donated $25.00 to a rescue shelter, the dedicated five years of love and affection to a soul who became a priceless member of our family, only to fine that she was worth no more than $ 12.50 in a court of law if killed by someone.

To honor his beloved Gracie and determined to show that the laws of the land are out of touch with public sentiment. Dr Kenneth Newman has proposed legislation called Gracie’s Law, if passed, Gracie’s Law would recognize the emotional bond that exists between pets and people, and entitle owners of a pet deliberately killed through an act of malice, or accidentally killed through an act of negligence, the sum of 25,000 for loss of companionship and pain and suffering as well as all legal fees involved.

Dr. Newman graduated from Purdue University  in 1979.  He has been practicing Veterinary Medicine in Pinellas County for over 30 years.