Healing and Spirituality: Chicken and Egg 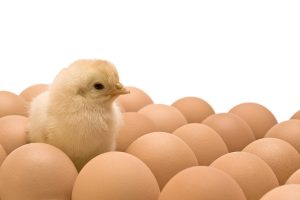 Spirituality is full of paradox and contradictions.  It holds the promise of greater peace and happiness, but just as often delivers pain and heartache, at least temporarily.  We think we know what we are getting into, but in fact we may be like the Fool in the Tarot deck, stepping off a cliff and hoping for the best.

One thing that is uniformly true is that sooner or later, any good spiritual practice is likely to kick up our inner hornet’s nest.  We all have them, the parts of ourselves that are in deep storage until we feel up to working with them.  What determines when we start working with them is usually the degree of misery they cause us.  At some point we realize we can’t keep on avoiding them or compensating for them.

That point came for me when I was in my mid-forties.  I had grown up with two alcoholic parents and the dysfunction got worse with each passing year.  By the time I was 18 I had formed a survival strategy, which was to leave and get as far away as I could.  It was a pattern that served me well for decades and eventually took me to China, which was as far away as it was possible to get before coming back in the other direction.

By that time, even though my parents had long since stopped drinking, I was still carrying the trauma and pain of those early years.  And, my lifeboat had sprung some leaks.  Using China as a base, I was travelling constantly, for work and personal interest.  I took beautiful photos, met fascinating people, had great stories to tell.  But I had increasingly become sad and anxious and angry, without knowing why.  After ten years, being an expat was no longer the adventure it had been, and I felt like I was running out of countries to hide out in.

When I returned to the States, I headed straight to therapy.  I was already a long-time spiritual practitioner but that had not helped me get to the bottom of things because I didn’t know how to employ spiritual practice in that way.  Asanas and meditation only provided temporary relief. They could not fix the fact that I had no access to the full spectrum of my emotions, and could not manage or be with the ones I had.  So, despite a previous bad experience with therapy, I went.  The night before the first session, I slept badly, sure that the therapist would scold me for not being happier or more together.  When I met her, I gruffly announced that I was not there to look at my emotions.  She did not react, and in fact my resistance was thinner than I’d been putting on.  I quickly melted into the process, with great relief.

This was not talk therapy.  In fact, there was never much in the way of conversation, or explanation.  Instead, for more than four years my therapist was a magician who whispered to my disowned parts.  They came forward, bringing old pain and new gifts.  Over time, I too learned to listen to and connect with myself.  There was movement and feeling and above all, safety and space.  I found that I could cry in a dozen different ways, from stalwart weeping to huge gulping sobs that left my stomach sore.  I got to know my anxiety and the layers beneath.   And I began the work of being ok with my anger.

For me this was astonishing.  All I had done was be willing to lay down some outworn defenses, and the rest happened outside of my conscious control.  In return I became a whole person, fully inhabiting my body and my feelings for the first time in my life.  My body and my heart knew how to heal, all I had to do was be there and hold it all.  It was not always easy, but it was always amazing.

The spiritual path is about relating to a bigger version of reality and being less self-centered.  It has been said that before we can let go of our ego, we first have to have an ego that functions.  This sounds ironic but makes sense.  If we are cut off from our body, we lose access to our experience.  If we can’t reach our hearts, the conduit to greater awareness and compassion is closed to us.  But this is not a chicken first, egg second proposition.  It’s more chicken and egg together.  Healing emotional wounds requires the same kind of surrender as spiritual practice.  If they need to come in a certain order, life will let us know the best sequence.