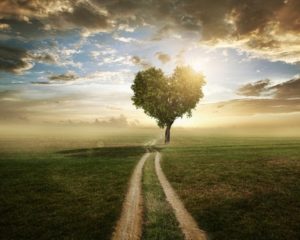 I remember the day when my niece called me sobbing on the phone telling me her mother was in the ER with a heart attack. The doctors didn’t expect her to live. I thought: “Not Again!”

My husband died of a heart attack. A grandfather of mine died of a heart attack before I was born. Our mother suffered from heart disease since she was 25 and died 8 years earlier. My brother, a silent heart attack 10 years before it was diagnosed and had 2 stents placed in his heart. But Julie was only 48 years old. A year later, she suffered a second attack. I said: “Enough.”

Several years before I had been gifted by Spirit with a Shamanic journeying method of contacting ancestors who could help shift unwanted generational family patterns. I had successfully used this with other family issues and with clients.  After Julie’s health crisis passed, I journeyed to our ancestors and asked for help. I contacted the original ancestor who chose to die of a broken heart rather than face the loss of his family after a battle.

We shifted the heart dis-ease genetic pattern and freed the family.

“Really?” you say. “Yes.” Now, 8 years later, Julie is fine. She is healthy, off all medications and sees her cardiologist once a year. My brother is off his medication too and is doing fine. Another niece who had the first signs of heart disease has cleared those indicators. Our ancestors can help us when we ask.

Folks ask me if you need to ‘believe’ in the ancestor’s ability in order to heal. Well, neither my sister, brother or niece knew I was using the ancestral lineage clearing process to shift the genetic pattern. My brother specifically doesn’t believe in this “woo-woo” stuff. I didn’t tell my sister about the healing until months later.

After a healing occurs, we still need to take care of our physical form. We always have free will to choose our path.

Julie followed her doctor’s orders and stopped smoking, modified her diet and did her physical therapy. She healed rapidly. My brother stuck to the instructions for about 3 months, then went back to his old lifestyle of smoking, eating cheeseburgers and drinking beer. Two years later, he had another 2 stents added to his heart. Now he works in his organic garden, has reduced his smoking and stress, and after his retirement, is doing fine.

The science of epigenetics proves we are not bound by our genetic heritage. Our DNA is merely a blueprint that we can choose to follow or modify. If dis-ease or other family issues appear in our lives because we unconsciously allow old beliefs to lead us down unwanted paths, we can shift those beliefs. Then, we take action to move onto new paths to support health, happiness and love.

I am looking forward to many more years of a loving family relationship with my brother, sisters and other family members without losing them to heart disease.

Ariann Thomas, B. S., J.D., the author of Changing Our Genetic Heritage: Creating a New Reality for Ourselves and Future Generations (2018) and Healing Family Patterns: Ancestral Lineage Clearing for Personal Growth (2012) is a healer, teacher, ceremonialist, speaker, and Shaman.She specializes in helping others transform traumatic family patterns with the help of ancestors and in Shamanic healing.  https://ancestrallineageclearing.com/.

Now I Lay Me Down to Sleep. What is Prayer?

What is Possible?   Prayer does not work when you start bargaining with God.   Prayer if d ...

Tapping Into Our Creative, Immaterial, and Infinite Force