Releasing the Chaos Even When it’s Challenging 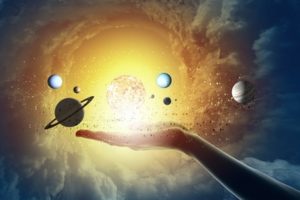 Just Be. This past year that statement was challenging, to say the least! But still, it is good advice in tumultuous times. We don’t need to get caught up in the chaos. We can decide how we want to BE.

2016 was a year of intense planetary energies and a lot of ups and downs. But be grateful for all that you have accomplished this year, especially internally. You made it through a Mars retrograde from April to June of 2016 which only happens every 2 ½ years. Then you made it through two eclipses in March and three eclipses in August and September. Every planet was retrograde sometime during this year and at times, almost all of them were retrograde at the same time! Retrograde planets make us slow down and revisit and repair some area of our life. Except for Venus, the planet of love. She stayed in forward motion all year, thankfully! We also survived four Mercury retrogrades this year! Communication was not the best and everything contractual seemed shaky and unstable for a lot of the year. Starting to understand why this Chinese year was called the year of the Monkey? It was all over the place and quite a roller coaster!

As we enter the last month of the year, Neptune is moving Direct now, having left it’s retrograde on November 19th. We are slowly coming out of the fog and illusion of Neptune, perhaps even fantasy, that we may have escaped to during this chaotic year. Pisces Sun, Moon and Ascendant will feel their energy coming back slowly but all signs will be losing their rose colored glasses or putting down video game controllers. Romance, spirituality, creative endeavors, and a collective type of love will see a resurgence as Neptune picks up speed going Direct in the New Year! Great gift ideas this holiday season will be those that inspire creativity and speak to the heart. Give of yourself this holiday season as Neptune asks us to be of service to our world.

All the planets, except Uranus are moving forward at the beginning of December. It will remain this way until December 19th when Mercury goes retrograde again. It’s a great time to get things accomplished during the first two weeks of December. Be wary of making big holiday purchases after December 12 or so, as the Mercury Retrograde may make you buy something you end up taking back after the New Year when Mercury will be going Direct again. So if you’ve just got to get that gift at the last minute before the holidays, make sure you keep the receipt! However, Mercury Retrograde during the holidays can be a good thing because it will slow everything down a bit and make us feel nostalgic. Perhaps we will reunite with someone we haven’t seen in a long while. Past lovers always have a way of showing up during a Mercury Retrograde. That may or may not be a holiday gift to you!

Don’t forget the Moon this month! Make time on December 13th to go outside, and”just be” in the presence of the beautiful Supermoon in Gemini. It will be glowing in the sky like a big white holiday ornament and will be an amazing sight! In general, full moons are a great time to culminate a venture or let go of something that no longer serves your highest good. Supermoons are even more powerful for this. Set your new intentions for the New Year on December 29th when we will have a new Moon in Capricorn. This is an especially auspicious time for determining your New Year resolutions, planning a new business, or for marriage proposals. But wait until Mercury goes Direct on January 19th before implementing your plans or signing any contracts or marriage licenses.

Pluto in Capricorn will be squaring Jupiter in Libra for most of the month, shaking up our institutions in a big way! Institutions like marriage, government, churches, banking, educational systems, and other societal structures that make up our foundations. If we can rise to the higher vibration of Jupiter in Libra by finding balance and compromise, it will go well. But if we fall back on the lower vibration of Jupiter in Libra, we may be too judgmental of our relationship partners or fall into racism. It’s up to each one of us which way we express that Jupiter in Libra. But the fact remains, our foundational institutions will be shifting in a huge way over the next few months with this planetary square. Make it a good way! Be a part of the change you wish to see in the world. Just be….the light that shines! During the holidays and beyond into the New Year! Wishing all of you a very blessed and peaceful holiday season!

Paula Sheldon, MS,  is a Professional Astrologer, Reiki Master, and Intuitive Healer who specializes in Western Astrology and Energy Therapies for healing.

What is COVID-19 Showing Us?

What is Really Happening Around the World Right Now? The truth is not too far. The first ...

Astrology Report for Nov 2018   Aries– Try to remember that relationships this mont ...