Our Connection to Pluto 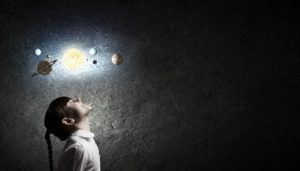 Pluto has been in the news as the US spacecraft, New Horizons, is sending pictures of this mysterious, faraway planet back to us here on Earth.  In light of the recent buzz, I’d like to focus on our astrological connection to Pluto. Ultimately, we are connected to all of life and all of the planets, but Pluto is a perfect example.

Because it is the planet farthest away from the Earth it is the last one to be photographed up close. Pluto was not even called a planet just a few years ago, but scientists have retracted that idea with the discovery of new data. Pluto was discovered in 1930, only 85 years ago, with the advent of more powerful telescopes, while other planets and stars like Venus and the Sun were observed with the naked eye by people all the way back before recorded written history. Ancient civilizations like the Mayans and the Egyptians used the planetary cycles to time crop planting and harvesting, ceremonies, and other events.  They were the very first astrologers and were amazingly accurate with their astrology and mathematical calculations of planetary cycles.  But they could only study those planets they could see in the night sky.  In modern times, we have lost touch with these planetary cycles and this is what modern day astrologers help us to understand, how the planets affect our lives and our energy, what cycle of life we are in, and the timing of possible events based on these cycles. Ultimately, we are in charge of how we express these energies and whether we grow and evolve with these planetary cycles.

Today we have the addition of outer planets discovered with the telescope like Uranus, Neptune, and Pluto.  They move much slower around the Sun, and therefore move very slowly through the natal chart of an individual. When one of these outer planets transits over a planet in our natal chart, significant events can occur!  Pluto is considered the big game changer in the astrological world.

In western astrology, one of the main purposes of Pluto, as a planet in our birth chart, is to break down and transform some area of our life. Very significant changes occur when Pluto transits over a natal planet in our birth chart. Because change requires we let go of that which no longer serves us or our purpose, Pluto is often associated with some soul searching, learning curve, and usually some sort of significant loss.  After the loss, if the person is the type to consciously pay attention to the growth and change needed in their own life, they then begin to rebuild their life again — usually in a new and improved way.  Pluto often asks us to dig deep and face our fears and ingrained patterns, let go of something that is not working, and rebuild it in a much better way.  But an individual can also unconsciously get stuck in the dark underside of Pluto’s energy and that is why it is also the planet of addictions, secrets, sex, compulsive behavior, power, deceit, and other serious issues. This happens when people are not conscious of what role Pluto is asking them to take on or what issue they need to address, so instead they escape into unhealthy behaviors or addictions. Pluto can change your life and make it tremendously better if you respect its place in your chart and do the work it asks of you to transform your life…to live more consciously…and to pay attention to its cycles in your own life through your birth chart.

It’s quite interesting that the first photo of Pluto appears to have a heart-shaped shadow on its surface. It seems appropriate to me as an astrologer because Pluto really gets to the “heart” of the matter in one’s chart.  Perhaps it is a reminder that Pluto is the planet that asks us to go within, explore the mysteries deep inside of ourselves, in our hearts, and transform our lives and our past for a better future.

Latest posts by Paula Sheldon (see all)
← Your Health is in the Stars! Know Your Birth Chart, Know Your Purpose! →
← Living and Leading Connected Have You Hugged Your Connector Today? →