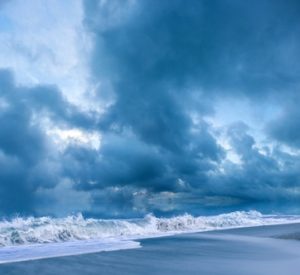 If you have ever stood at the edge of a body of water – the ocean or the gulf or even a large lake – and watched a storm moving directly toward you, you know how exciting that is.  As the storm gets closer and closer, you know that the approaching, grey-green wall of water will eventually wash right over the spot where you are standing, soak you in the present moment, and then move on past you as easily as it came toward you.

I have a theory that time works exactly like that.  You are literally standing still in a tunnel of time; future time is moving toward you and past time moving away from you. But from where you are standing in the tunnel, the wall you see approaching is the wall of Quantum Soup, which contains the ingredients for everything there is in the Universe. As soon as you start to think about something specific, and then consistently hold that thought in time, as time moves toward you, your thought forms out of the soup into something real which then manifests in your experience.

Many poets, philosophers and quantum physicists (past and present) appear to agree with my theory. Khalil Gibran, in the Prophet says: “You would adjust your conduct and even direct the course of your spirit according to hours and seasons. Of time you would make a stream upon whose bank you would sit and watch its flowing. Yet the timeless in you is aware of life’s timelessness, and knows that yesterday is but today’s memory and tomorrow is today’s dream.”

Other mystics, such as Charles Fillmore, the co-founder of the Unity movement and the Spiritual teachers called Abraham teach us of the mighty Law of Attraction, which is so reliable that we can accept, based on our own experience, that whatever we hold in our minds today – whatever we can literally dream up in a consistent series of our now moments – will actually form in time, future time, and then move toward us into our reality.

Is that a scary thought?  Or – does it mean you have absolute control over what you bring forth into your own future?  The answer is probably some of both, because before you can “always” create exactly what you want in your life, you must first AWAKEN to your own creative powers.  And you must stay AWAKE and not allow your intentional thoughts to be drawn away into other, ego-driven thoughts that are fearful or non-productive.

But how do you even know when you are AWAKE or asleep?  In my home-study course titled “MIND IS YOUR OWN BUSINESS”, I share this story to illustrate the difference between “existing” in an asleep state (hell) and “living” in an AWAKENED one (heaven)

There was once a Samurai, a fierce warrior, a man whom everybody feared, who wanted to understand the difference between being asleep and being AWAKE. He heard that there was a wise monk who knew the answers to such questions, so he traveled to the town where the monk lived.  He asked the other monks where he would find this great and clever teacher and he was told that the monk he wanted to see was meditating.  In true warrior fashion, the Samurai demanded to see him immediately. No one said no, so he went to where the monk was meditating and interrupted him.

“I want to know the difference between being asleep and being AWAKE,” he said “and I want to know now!”  The monk looked up at the warrior, stared directly at him for a few minutes and said, “That is the shabbiest armor you are wearing, that I have ever seen.  Besides that, you are the ugliest person I’ve ever seen and on top of that you are stupid. I would find it hard to imagine anyone else ever being as stupid as you.”  The Samurai went into a rage and raised his sword above the monk’s head, fully intending to cut the monk in half. “Now that,” the monk said calmly, “is being asleep.”

In an instant, the warrior realized what the monk had done.  He had risked his own life to answer a question he had been asked by a perfect stranger.  Tears came to the Samurai’s eyes and he fell to his knees, thanking the monk for showing him that he was in charge of his own thinking and never the victim of someone else’s opinion.  As he wept, the monk consoled him, murmuring; “Now in that understanding, great warrior, you are AWAKE.”

Once you AWAKEN to your own power, how do you stay AWAKE?  How do you not become distracted, as the great Samurai warrior did, by other people’s opinions, by the six-o’clock news, by what you see happening in the world around you?  It takes very little to drag you down into negative thoughts and negative situations.  To avoid that happening to you, you have to set an intention, not just once, but over and over again to BE AWAKE AND STAY AWAKE in each now moment.  And, you have to practice being AWAKE.

In a letter to her congregation, the Reverend Barbara Williams made this suggestion:

“One simple practice to bring us into this sacred “NOW” moment is to simply say to ourselves, ‘I am aware that I am now AWAKE.’   We can use this simple tool throughout our day, saying, ‘I am aware that I am driving to work.  I am aware that I am making dinner.’  Or even, ‘I am aware that I am breathing.’ As we acknowledge what we are doing in these moments, we come alive to our bodies and to the world, owning our actions instead of habitually performing them. As a result of this practice we will AWAKEN to how often we act without intention and how this disengages us from reality. Being aware as we perform even one task a day has the power to transform our lives. Just imagine what would happen if we were able to apply the power of awareness to our entire day.”

Why not make a commitment to yourself to spend some time acknowledging that you are aware and awake to what is happening around you, enjoying the “NOW” and using that awareness in the present moment to draw out of the Quantum Soup – more and more desires of your heart.

John Mclaughlin
John McLaughlin is an ordained Unity Minister, currently serving as Co-Minister with is wife, Lauren, at Unity Now – a Spiritual Learning Center on the Internet.John is a nationally known speaker, a teacher and creator of the DVD series – MIND IS YOUR OWN BUSINESS.In addition, John practices energy management techniques including NLP (Neuro Linguistic Programming) EFT (Emotional Freedom Technique), and Psych-K.As part of his ministry, John presents an open offer to any eligible Veteran from the Tampa Bay Area who has been diagnosed with PTSD – Post Traumatic Stress Disorder – to work with them using EFT at no cost. EFT has proven successful in many (but not all) instances in relievinganxiety and reducing multiple effects brought on by PTSD.Veterans are invited to visit this web site to watch a demonstration of EFT and if they then wish to contact John personally to find out more, they may do so through the Web site. www.ptsdvetstampabay.com