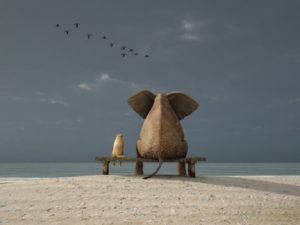 Frankie brought two glasses of ice water and set them on the table next to the ELF.

“Are you going to drink this?” Frankie asked as he looked at the ELF’s little, transparent, pulsating body and wondered where the water would go.

“No,” the ELF laughed. “There is no need for food and drink in my realm. I’m going to use it to help answer your question. Are you ready?”

“Where did the water in the glass come from?” the ELF asked.

“It came from the faucet.”

“And where did the water in the faucet come from?”

“It came through the pipes, I guess from a water tower somewhere.”

“And where did the water in the water tower come from?”

“From a reservoir, I believe, but if you’re going to ask me where that water comes from, I don’t know,” Frankie said truthfully.

“What you have been describing is a very clever method that physical beings, who live together in communities, have devised to deliver water right to their own homes, businesses, and public meeting places,” the ELF explained.

“All people on the earth don’t enjoy such sophisticated water delivery systems, of course. Many still draw water from underground wells, or take it out of the rivers and lakes in buckets, but ultimately, everyone gathers water from a never-ending supply of water, somehow.

And here is what makes that water supply never-ending, Frankie. The cycle begins when water falls to the earth from the sky in the form of rain or a variety of precipitation types. Some of that rainwater is stored underground. Some of it fills the rivers and streams and collects at surface points such as lakes and ponds, bays and bayous.

Water evaporates from those surface points and rises to form clouds, which eventually drop rain back onto the earth again. The cycle is never-ending, and although human beings have managed to disrupt some of the process some of the time, nothing will ever disrupt the cycle seriously because water is the sustainer of all life. In other words, I’m bigger than they are. Are you following me so far, Frankie?”

“A few minutes ago, you siphoned off an individual portion of the earth’s water supply into a single glass, and then you added ice cubes. What are the ice cubes made of, Frankie?” 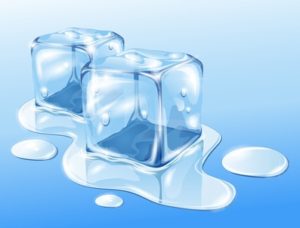 “And if you leave that glass sitting out here on the patio for a couple of hours, what will happen to the ice cubes?”

“And when they melt they become water again. So here’s the big picture, Frankie. Although sometimes water takes different forms, ultimately there is absolutely no difference in the content of those forms. The water in the ice cubes, the water in the glass and the water supply for your entire planet all contain the same stuff – they’re all the same perfect mix of hydrogen and oxygen you call water.”

“Then let’s translate it to the relationship between you and me, Frankie. I am a never-ending supply of life called the Eternal Life Force. And although I may take different forms, ultimately I am the same in all those different forms. You choose to be in physical form, but that doesn’t separate you from me. You aren’t all of me, Frankie, any more than the water in the glass is all of the never-ending supply of water on the earth, but you are a part of me, and you are made of all the same stuff as I am. That is why I say that I am you and you are me, everywhere, all the time. Get it?”

“Well, let me try to explain it in my own words and see if I got it or not,” Frankie said. “What I really am is a small portion of the Eternal Life Force in two forms at the same time; a non-physical being called ELF, and a physical being named Frankie Doerrer. I am not all of you but you are all of me. Is that anywhere close to what you meant?”

“That’s exactly what I meant, Frankie!” said the ELF, and he got so excited he began to shimmer brilliant colors so vigorously that Frankie had to turn his eyes away. All that vibrating energy was making him kind of dizzy.

“You can try, Frankie, but each individual human expression of me has to remember his or her connection to me personally, and each in his or her own time. You can share with other people what you have learned about me, but some won’t be ready to hear you at the time you tell them about it. Don’t worry about that. They’ll either figure it out for themselves or they won’t. Of course, if they ask me for help, I will help them too.”

An Excerpt from “Go to ELF! Connecting With The Eternal Life Force”

Lauren McLaughlin is part of a team of thousands of teachers on the planet at this time, whose purpose is to remind those who wish to remember that they are deeply and dearly loved by the Creator and Sustainer of All Life, that the answers to the most important questions they have are carefully stored in their own heart, and that they deliberately chose the human experience for the sheer fun of it. Lauren is a writer, speaker, and retreat facilitator who is currently living happily-ever-after with her husband, John, in Clearwater, Florida.Lauren McLaughlin is available for personal, Spiritual coaching. Contact Lauren at www.gotoelf.com or email her at godbless@tampabay.rr.com

We Are What We Eat

As children are getting ready to go back to school, I am always saddened to see how much emphas ...