The Battle for Consciousness: Thinkers Island

Aligning with Higher Self 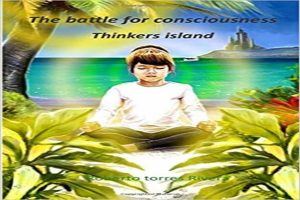 About the Book: After months of being obsessed with finding clues to his father’s murder. John is convinced to take a relaxing trip on his boat unknowing that he was about to set on a journey that would change his life forever.

Lured by a strange anomaly, which leads him to an uncharted island., he finds himself in the presence of highly enlightened people called The Thinkers. They explain that he was allowed on the island because of his unique abilities and that he was chosen to join them in their fight to save children from being hunted and killed by their enemy.

Although very uneasy with this idea, in the beginning, he later learns that the people they call their enemy were also responsible for his father’s death. With a vengeance now in the mix, John is willing to stay and help the Islanders fight these evil people known as The Controllers.

John discovers that the Thinkers are hundreds of years advanced from the rest of the known world and kept secret by a force field surrounding the island. They show him unbelievable technologies as he learns about the plant and animal kingdom and the powers that they have. A Dolphin who takes him on a journey underwater and teaches him about the island’s history also helps him discover Josh, a being from another dimension. He manages to fall in love with one of the governors and with her seductive powers, she helps John see into other worlds and the alternate realities that exist there.

Ashar the seven-year-old girl that used her skills to lure him to the island explained about a virus designed by their enemy the Controllers and how it was affecting his world. Her mission was to teach people to retune with the source clock allowing the average person to think for themselves and regain control over their minds…click here to read more about The Battle For Consciousness: Thinkers Island

Meet the Author Robert Torres Rivera:  As a musician, I have performed on live television as well as multiple bands. As a composer, I have an award from the U.K.Songwriters contest. I was system engineer for a cable company and a radio engineer for a radio maintenance firm. I’ve owned multiple businesses and have traveled to other countries on work assignments. I am in constant search for knowledge, the expansion of my consciousness and enlightenment. I own property deep in the Caribbean National rain forest where my spiritual guides teach me about the powers of the plant and animal kingdom as well as the powers within me. In my writings, I try to share in an entertaining and unimposing way a deeply spiritual and metaphysical perception of the world around us and within us.

Get your copy of The Battle For Consciousness: Thinkers Island