What is the Value of an Opinion? 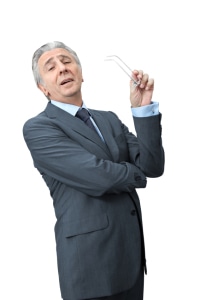 When it comes to opinions there is no shortage.  Everyone has opinions, it’s human nature.  If you have thoughts in your head you have some kind of opinion involved with that thought.  Opinions are such a large part of our life that we even have experts in our society who make a living based solely on their expert opinion.

There are fashion experts, clothing and image consultants, interior decorators, computer consultants, and much more.  These experts are the kind of know-it-alls who help make our lives a little easier and a little more fun; they are not a necessity as much as they are a “nicety”.

The other kind of experts in society are ones of a more serious nature.  The highly educated professionals like doctors, lawyers, politicians, scientists, engineers, and so on.  These are the people who help make our world run smoothly and help keep us well.  So what happens when these experts have varying opinions that not only conflict with each other but conflict with what is morally or ethically right?  What happens when these experts ignore facts and disregard basic health issues in an effort to fatten their bottom line?  What happens when the truth is so distorted and confusing that we as consumers can no longer find the truth about what the experts are giving us advice about?

One industry that has made a fortune out of being an expert at deception and confusion is the food industry.  For years the experts that govern it have been giving the public bad or unfounded information. One example of the confusion and miscommunication is ORAC.  ORAC, the oxygen radical absorbance capacity,  a system used to measure the amount of antioxidants a food or supplement contains. Pretty interesting right? However, when looking for a recommendation about what food is better from an ORAC standpoint the information is contradictory at best. In the simplest terms ORAC justifies labeling something a super food.

ORAC is a government organization that essentially works to help the food industry justify their market claims.  On the official ORAC web site you will not find ratings of fruits or vegetables. Instead, you will find information on how to make your labeling meet the gold standard.  When looking for a recommendation about what food is better from an ORAC standpoint the information is contradictory at best.  One site lists various foods with reported values and claims that the USDA recommends an intake of about 3000 to 5000 units per day.  They go further to explain that different processing and growing methods may change the ORAC value of a product.  Then at the bottom of their list they mention that there is no relationship between ORAC values and health benefits.1  So where is the value for a consumer in the ORAC system? 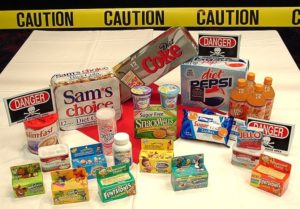 Another area of controversy when looking to the experts for advice on food is the issue of aspartame.  Since 1996 there have been more than 200 scientific studies on aspartame with regards to its safety.  In the mid 90’s studies showed that an increase in tumors and breast cancer could be linked to the sweetener.  This was later dismissed because it was felt that there was a significant time lag between the dose and response.2   The expert opinion of Dr. Richard Wurtman on the issue of aspartame is very different.  Dr. Wurtman is a renowned scientist from MIT who testified to Congress on the affects of aspartame in the body.  In his testimony he stated, “When you have aspartame, you are not obtaining any of the other amino acids, which are present in all proteins that block phenylalanine ability to pass from the blood to the brain.” 3 He also stated that “no other food that mankind has ever eaten causes the changes in brain chemistry that are provided by aspartame.” 3  Dr. Wurtman made these comments in September of 2004.  Today, aspartame is in over 6000 foods available to the general public. 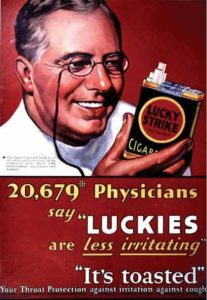 Doctors and other public health officials would go on TV and promote smoking.

Many other opinions about health and food have changed over the years.  In the 1940’s it was considered a very healthy thing to smoke.  Doctors and other public health officials would go on TV and promote smoking.  In movies there was always a scene or two that would show the leading lady smoking.  Today we know that smoking is one of the worst things you can do for your health and longevity. Another habit from our past that was good for us was a daily serving of cod liver oil.  However, somewhere along the line we became too sophisticated for cod liver oil.  Today we know that the daily serving of cod liver oil was good for us and a key factor in lowering neurological disorders and inflammatory disease.

So where does this leave us? We have become a society dependant on the opinions of others.  When we try to go out and do the right thing for our bodies and find proper nutrition, there is conflicting information and expert opinions that leave us more confused and frustrated than when we started.  One option is to go to school and study these things.  But beware, because even that can become tricky.  Oftentimes the authors of text books and other experts will educate you on their opinion leaving out the other side.

Whats the Bottom line when dealing with Experts and their Opinions?

The bottom line is you have to educate yourself.  You have to become your own personal advocate, collect the information from both sides and then formulate your own opinion.

Who knows? Maybe you could become an expert.

1Orac values. (2005, May). Retrieved from  http://www.phytochemicals.info/orac-values.php

3Martini, B,. (2005, May 28). Congressional record,dr richard  wurtman,aspartame . Retrieved from http://www.dorway.com/

Anna Beller
Anna Beller is a mother of 9 and has lived on a dairy farm for most of her life. In her spare time she studies philosophy, and alternative medicine. She writes about her studies of human and animal behaviors with regards to their environment. She is a big believer in Quantum Possibility and our abilities to live a Conscious and Shifting life

Latest posts by Anna Beller (see all)
← Why we have to say NO to monsantos Sugar: The Legal Drug →
← Are you where you thought you’d be? Shifting into wellness with hypnotherapy →