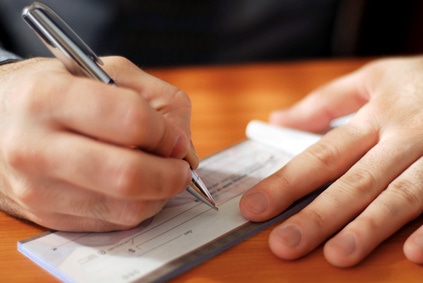 A man went to visit his banker and he said, “I want to cash this check.” The teller said, “Fine. Just sign the back of the check and I’ll cash it.” He said, “No, no. Give me my money first, and then I’ll sign it.” She said, “Sir, we don’t do it that way. You have to sign the check first, and then we will cash it.” He said, “No, I don’t want it that way. You give me my money and I’ll sign.” She called over the bank manager, who argued with the man awhile. But the man still wouldn’t sign the check to get his money. Finally, he said, “I’ll just find another bank to cash my check.”

He left, went through the same routine with the teller at a second bank, and then he went to a third bank. There the clerk very patiently said, “Sir, you must sign the check first, and I’ll be glad to give you the money.” The man just wouldn’t listen. Finally the teller took out a baseball bat and hit the man right on the head. She said, “Sign here!” And he did. And he got his money.

The next day the man saw the first bank teller and said, “Well, I got my check cashed.” The teller asked, “Did they make you sign the check first?” He said, “Yes, they did.” She asked, “Why did you sign it for them but not for me?” He said, “They had a wonderful way of explaining it.”

It takes that kind of “explaining” sometimes, doesn’t it for us to understand what we must do to become enlightened being?  But it shouldn’t have to, to because we are already enlightened beings. We could literally just set our old beliefs aside and choose to be enlightened right now, but if we can’t do it that quickly, we can speed the process up considerably by just “lightening up”.  If we don’t try to make things happen as much as we allow them to happen we see the light much more clearly.

Here are the instructions for allowing things to happen: Tell God what you want first and make very sure that your  “Asking” is as clear as possible.  Then get out of the way and let God take care of the details.

It’s also very important to make the enjoyment of our own life a priority and not pay a lot of attention to what others are doing with their lives.  Even if you don’t much like what they are doing, by giving whatever they are doing your attention you also give it your energy and it grows stronger.

Here’s a Powerful Affirmation that will help you reach enlightenment much sooner than you think might be possible.

Repeat it 12 times a week for 12 weeks and watch life’s entanglements sort themselves out before your eyes.

Harry Houdini, a favorite magician, used to tell people that he could get himself out of any jail. He’d let himself be locked in jail and in two or three minutes, he’d be out. One day he was put into a jail just like the many others he’d been in, and as everybody left, he took off his belt, pulled out his little hard wire and started to pick the lock – just as he’d always done. For over half an hour, he tried and tried to pick the lock, but it just wasn’t working. Finally he got a little tired and took off his belt and hung it on the bars of the door. The weight of the belt made the door swing inward.  You see, it wasn’t locked.  He had been attempting to unlock a lock that wasn’t locked on a door that opened in instead of out..

Your own enlightenment is never locked away from you – ever.  You’re already a totally free being on the inside. You simply have to accept, recognize, and honor your own limitlessness internally so that you can experience it externally as well.

How about making this the week that you decide to “Lighten up” – particularly on other people.  As soon as you let others off the hook, your own freedom will begin emerge and life will become a great deal more pleasant.

Always remember – God Loves You and so do we! The Revs

Latest posts by Lauren McLaughlin (see all)
How powerful are your thoughts in creating a Wonder-fillled life? →
← Shine Bright: Looking in the Mirror with Love How to Fully Engaged →