Your Word Fortells Your Possibilities 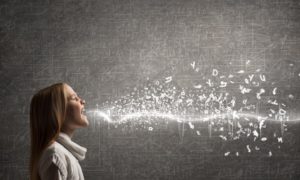 In his book, “The Four Agreements”, a Spiritual teaching based on ancient Toltec wisdom, author Don Miguel Ruiz describes the first agreement we are instructed to make with ourselves and with the Universe, if we are to be honorable and contributing citizens of the world. That agreement is:

“Be Impeccable With Your Word”

Ruiz is pretty emphatic in his attempt to help us realize the power of our spoken word as an expression of what we innately believe as who we really are and who we intend to become. He says: “The word is not just a sound or a written symbol. The word is a force. It is the power you have to express and communicate, to think and thereby to create the events in your life. You can speak. What other animal on the planet can speak? The word is the most powerful tool you have as a human. It is the tool of magic. But like a sword with two edges, your word can create the most beautiful dream, or your word can destroy everything around you.”

If we are honorable when we speak, our word becomes our bond – an expression of what we believe to be the truth, as we know it. An elderly Southern gentleman went into a bank in Atlanta and asked the banker to ask one of the bank’s other customers to transfer a considerable sum of money into his account. The banker said, “What makes you think that man would give you the money, even if I were willing to ask him?—which I’m not.” The old gentleman said, “Well, thirty-five years ago, I lent him a large sum of money, and the agreement was that if I ever needed it, I would simply ask for it.” The banker said, “You’re not going to get that money. Even if you had a written contract, which you don’t, the statute of limitations ran out on that years ago.” The gentleman said, “Sir, just ask him. He’s a man of his word, and the statute of limitations never runs out on a man’s word.”

The word impeccable means “without sin.” The Toltec defined sin as “anything you do that goes against yourself.” They further believed that expressing judgment or blame is an ultimate example of going against yourself, because we’re all one. Whenever we blame someone else, we are blaming ourselves; whenever we judge someone else, we are judging ourselves. Ruiz explains that from this point of view, the whole concept of sin changes from something moral or religious to something commonsense. To be impeccable in your word means to express only those thoughts you want to experience.

In his book Smile for No Good Reason, Lee Jampolsky includes a chapter entitled “Watch Your Language.” Jampolsky said that when he was learning a new language, he had the opportunity to not learn unpleasant words, and therefore he didn’t.

Some words, according to Jampolsky, are limiting, and he suggests we use them very sparingly: “can’t,” “impossible,” “never,” “stupid,” “weak,” “inferior.” Others are labeling words, like “hopeless” and “useless.” To help his students discover the impact of words, Jampolsky asks them to sit for five minutes and quietly repeat a group of limiting words such as “hate,” “impossible,” “afraid,” “frown,” and “separate.” Then he asks the students how they feel. Jampolsky says “yucky” is the word they usually use to describe their feelings. In the second part of his lesson, he has his students sit for five minutes and quietly repeat these words: “forgive,” “possible,” “love,” “smile,” and  “one.” This exercise is very telling. You might want to try it. It proves that we need to watch our own words; they affect how we feel every day.

Many people like to ask themselves what person they would like to be marooned with if they were going to be marooned on a desert island, or what food they would choose if they could have only one food for the rest of their lives. Jampolsky, however, asked himself what word he would speak if somehow his speech became limited to just one word; one word, that all by itself would create all of his future possibilities. He chose love. I chose God. My husband chose freedom.

If you could have only one word to use for the rest of your life, what word would you choose?